“Moss” is a 5 year old domestic longhaired cat that was admitted to our clinic recently for vomiting that contained some blood. He was vomiting and regurgitating hairballs for the past few days. Longhaired cats are more prone to hairballs because as they groom themselves they ingest their longer hair that more easily forms into a ball also known as a trichobezoar. Moss also had a condition called flea allergy dermatitis which caused him to excessively groom himself and ingest even more hair.

Most hairballs do not cause major problems and are easily vomited back up or pass through the gastro-intestinal system. In Moss’ case however, we found on x-rays that his was extraordinarily large, distending the stomach so much it occupied nearly half of the abdomen! We sent these x-rays to a radiologist who is a veterinarian that specializes in the interpretation of x-rays. The report suggested this was most likely a hairball, especially given his history.

For ingested items that are still in the stomach, it is possible to retrieve them through a procedure called endoscopy. When this is successful, the patient can avoid the possible complications and healing time of surgery to remove items or foreign bodies from the stomach. Endoscopy allows us to use a flexible hose that contains a camera and a tube where special instruments can be inserted through with claws, baskets or other tips at the end. The camera allows us to see inside the stomach and direct the instruments to the area where the items are and retrieve them. It is harder than it sounds and takes a lot of skill! For this procedure we called in a travelling veterinary who performs endoscopic procedures, Dr. Gorodetsky. He was forced to remove the hairball piece by piece as the it fell apart easily. The pieces removed varied in size from 1-15 cm in length. Moss recovered well and was able to go home later that afternoon!

If you would rather not see the hairballs, maybe you should pass on the pictures 🙂 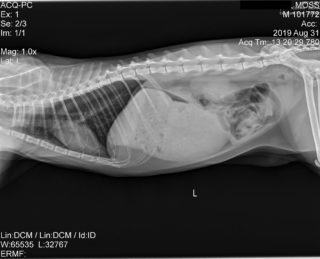 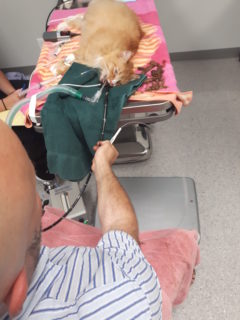 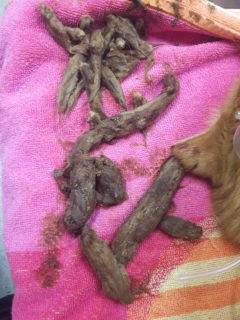 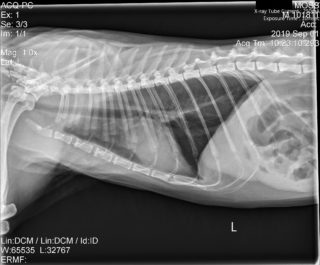